My school year officially ended on May 30th.  Yeah, that’s a Saturday.  It sucked, but what ‘cha gonna do? Anyway, as always, the end of the year is bittersweet.  It’s a joyous time as I get to watch the seniors finally be set free to fly.  But at the same time, it’s sad because I have to watch the seniors finally be set free to fly.  As I watched them throw their mortar boards up into the air Friday night, I wondered many things.  Did I do enough?  Did I teach them enough?  Did I help them to understand they are more than the small town they grew up in?  Did I give them enough room to create and imagine?  Did the lessons I tried to instill really sink in?  If not, will they eventually sink in?

Once I am done questioning myself specifically about the seniors, I take time to reflect on the past school year.  I look at what I learned.  I look at what I can improve.  I look at the triumphs.  And, I look at my failures.  A lot happened this year.  I don’t think I can talk about it all in one post.  So, stay tuned for a series of  posts where I can focus on the learning and the failings from this year and how I can move on and improve for next year.

In the meantime,  let me use the rest of this post to show some of the highlights of the 2014-15 school year at THS.

VARSITY FOOTBALL TEACHER OF THE WEEK

I was honored by our Varsity Football Ducks as the final teacher of the week.  The teacher chosen gets to don a jersey and hangout on the sidelines for the game; however, I chose to sit in the stands–better view of the whole field.  This game was special as it was a play-off game at “The Palace”–a huge stadium on the outskirts of Austin.  It was a very cold night, but I dressed warm and cheered my heart out.  The boys played hard, but unfortunately ended their season.  I was honored by them a second time that evening as they allowed me to share in their emotional ending.  The boys were not afraid or ashamed to show the tears in their eyes as their high school football careers came to an end.  I kept the jersey and hung it up my office.  I don’t think I was supposed to do that, so don’t tell nobody. 😉

THE BIRTH OF THE LLAMADUCK

My classroom got a new mascot this year.  While my intermediate/advanced worked on their morphing animal project, I too thought I would join in the building.  And, thus the birth of the Llamaduck.  Part llama.  Part duck.  100% awesome!!  The duck sits proudly in the room, welcoming all who enter.  Kids like to pick him up and hug him.  They rub his head.  They try to steal him–like I wouldn’t notice he was missing.  In fact, one day he was hidden and I couldn’t find him.  It was a sad afternoon. Many seniors thought they should be able to take the llamaduck home.  But alas, I said no–the Llamaduck must stay in the room.

This year my room was visited by Miss Mia Wallace and Ms. Frizzle.  I love to dress up to show my school spirit.  Celebrity day and favorite cartoon character day were no exceptions this year.  I also dressed up for pajama day with some comfy slippers and yoga pants.  I think my cheesehead hat and cheese earrings also made an appearance to support the Pack, but I just don’t remember. 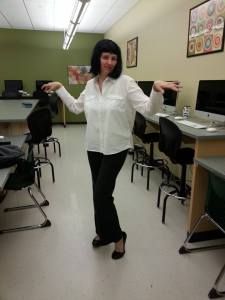 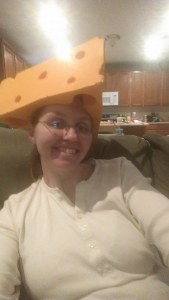 You can read all about my adventures in New Orleans here and here.  It was my first convention, and definitely not my last.  I had soooo much fun and learned so much.  I made new friends and connected with “old” ones.  I look forward to Chicago…I hope. 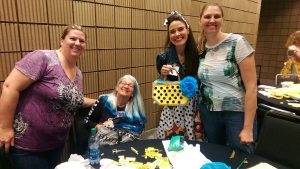 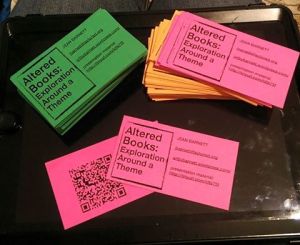 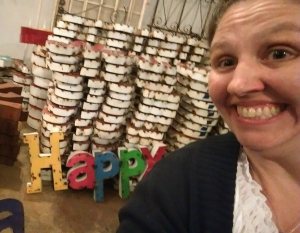 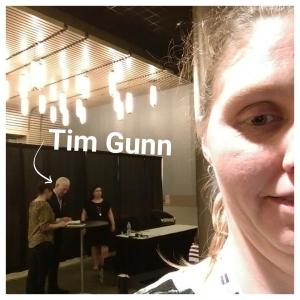 APRIL TEACHER OF THE MONTH

It is always a wonderful thing to be recognized for all the good you do in your classroom.  Sometimes in art we feel overlooked and underappreciated.  So, when I won the Crystal Apple Award for April, it was a great surprise.  And a happy one.

This year’s art show went so much smoother than last year.  I was prepared earlier.  I had students take the wheel the day of, which made all the difference.  It downpoured that evening, but that didn’t stop the community from coming out and celebrating the amazing young artists we have at THS.  Here is a link to the slideshow of artwork.  It’s long, so don’t say you weren’t warned.  (Eventually there will be a link…I haven’t quite finished editing yet.)

We are a 1:1 Macbook school.  Our computers were starting to run slow because, well, nothing is built to last for very long anymore these days.  Our district was able to update our laptops, starting with the faculty.  They are so shiny and light.  Love them.

Hidde was our exchange student from the Netherlands.  He is an amazing person.  He played in our Duck band.  He tried to play soccer, but some UIL rule wouldn’t allow him to play in actual games.  He is smart, funny, and super talented.  I was lucky to have him in my art 2 class this year.  I wrote up a student spotlight on him here.

Anyway, at some point, it came to light that he was not going to be able to actually walk at the graduation ceremony.  For some state/district reason, it just couldn’t be allowed.  Of course, the student body didn’t want to know the reasons why, they just wanted him to walk with the rest of his class.  They took to social media and soon it was everywhere…the local paper, the Austin-American Statesman, KVUE (local ABC affiliate), and even Good Morning America.  It was an interesting last couple of weeks at school.  Hidde was given a certificate at our awards ceremony, but was not allowed to walk.  He was recognized by the Valedictorian at graduation…and luckily Hidde was up on the stage with the Duck band to come forward and be recognized.  One last cool thing is he has a rap song, written by Hidde, produced by a student who goes by T-Hall, and placed on T-Hall’s SENIORIT15 album. 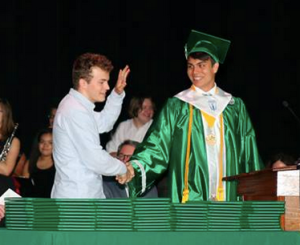 If you haven’t been watching the news the past week or two, well, then get thee to a tv man!!!  Central Texas has been flooding. We’ve been in a draught for many, many years now. On Saturday May 23rd, insane rains poured over Central Texas and wiped out numerous homes along the Blanco River in Wimberley.  If that wasn’t enough, on Monday, 2 storm systems came through–producing a few tornadoes and combing into one storm, leaving  behind a ton of water and flash floods along a wide section of Central Texas.  Taylor was not left out.  Many neighborhoods found themselves underwater. Some district faculty and students ended up with water in their homes–some losing everything.  Our high school was also the recipient of the flash floods.  Our front vestibule and offices were water-logged. Water seeped under the gym floor and gathered in the athletic offices.  It reached as far as our cafeteria. Workers came in around 11pm Monday night and continued to work throughout the day Tuesday–part, if not all, of both gym floors will have to be replaced and the carpets will all have to go as well.  While it is dry now, it could have been worse, and it is sad to see my school community hurt.  Our speech teacher started a collection and it felt great to be part of an amazing teacher/staff community who donated so much to help the town.

It was one of my best and favorite years teaching in my 8 year career.  I have decided that teaching art is truly my calling.  It is where I need to be.  I have fun every day and I make the most special and lasting relationships.  Every year my kids ask why I drive so far to work, and I tell them it’s because of them…that they are make it worth it.  I will miss this year’s seniors, but I know they will do great things. 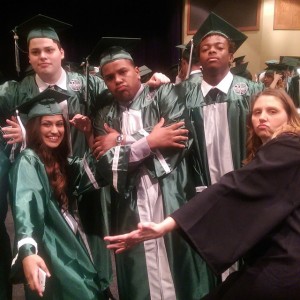