Recently one of my classes took on the monumental task of creating a cardboard “city”.  I had shown them a photo I found on Pinterest.  I asked them if they were interested in this and they said they were and were excited to try and build something in the same vein.  I knew that it would be difficult.  I save cardboard for ever it seemed.  I also knew the skill level of my students.  I would never had expected them to rise to this level.  But I did expect more.

My students originally thought they would make a ship, but somehow they changed it to a castle.  I thought, that is going to be great.  They will cut out brick and make it look like a bas relief.  Wonderful.  One of the students even said she would make a dragon to go with it.

As time went on and I checked on their progress, I grew more and more disappointed with the castle.  It had a great basic shape, but other than that…it looked like something I would order out of one of those catalogs for prom.  The covered the whole thing with craft paper and drew squares.  These were my seniors, my advanced sculpture students, and they had over 2 months to work on this.  How could this be what they created?

Now it is over a month later and I have had time to think about it.  I still don’t know how to deal with the disappointment of this project.  Should I consider it a project flop that Ian Sands could put in his book?  Should I just brush it off as a early case of senioritis?  Was I expecting too much?  Did I not push them enough to do more?  I know they learned a lot about creating something so large and working in a group. As a teacher, I appreciate what they learned from this project.  But shouldn’t sometimes the product be important too?

How do you deal with disappointment in projects?  What do you as a teacher learn from it?

By the way, the dragon head turned out awesome.

Last week I took my senior (and one junior) sculptors on a field trip.  Field trips at my school don’t happen very often, so when my principal said I could go, I didn’t hesitate in making the plans.  I picked a day in April when I thought it would be a great time to visit an outdoor sculpture museum.  And, man did I pick a good date.  It was sunny and mild.  The flowers were blooming.  The trees were green.  And the air was fresh.  It was a spring day in Austin.  And, it was a great day to visit the Umlauf Sculpture Garden.

I am not sure how many of my students had actually been to a museum before.  Perhaps they had been to the historical museum in their town, but that isn’t really the same.  At first my kids seemed bored.  But as we watched them, I think they were more unsure how to act.  What did they know of a docent and what a museum tour would be like.  I was worried that the trip would be a bust.

But then we moved off the patio and went over to see St. Michael and Lucifer.

Our guide told the students they could touch the sculptures…and oh man, it was a whole new ball game.  My kids started to liven up.  They impressed me at every turn.  They were so well behaved.  They were genuinely interested.  It was one of the best days of the school year.

Student: “I liked that the Sculptures were surrounded by nature. It was something I haven’t seen before. I also like that they were very realistic and had stories behind them.”

Student: “They all had sentimental value and meaning to Umlauf. I really enjoyed how he made his sculptures with so much detail.”

Student: “My favorite sculpture was one of the sculptures outside. It was one figure with an arrow or spear, going in to stab to be what looked like the devil. It’s a religious piece and I just really enjoyed it because I grew up around a very religious granny.” 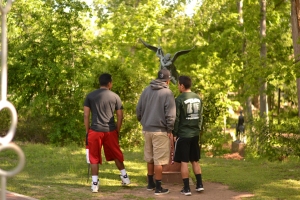 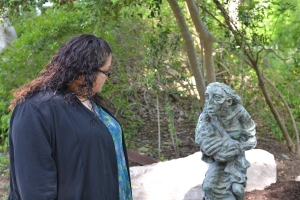 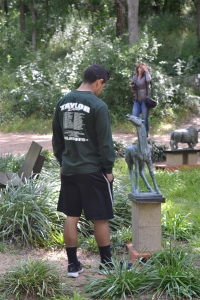 One of my personal favorites by Umlauf.