One of my goals this year was to have my students really understand the artistic behaviors.  I thought last year the students were looking at them only on the surface.  I want a deeper understanding for them this year as I feel the behaviors I use are important, not only for growing as an artist, but they are things that can be transferred to other aspects of their academic and their personal lives.

I wanted my students to be introduced to the 9 Artistic Behaviors before we jumped into creating art.  But, I didn’t just want to do a power point on them.  I wanted something more to go along with each behavior.  That’s how I came up with my Artistic Behavior Boot Camp.  In this boot camp, we would spend about a week and a half being introduced to the behaviors.  As a class, we would do an activity.  Then the students would be given a reflection sheet where they were asked to look through the artistic behaviors that are listed on their sheet and posted on the wall (with a brief description under each), and choose which behavior they thought the activity best connected to.  They had to say why they felt that way, what they learned from the activity, and how they thought it connected to being an artist.

THE BEHAVIORS AND THEIR ACTIVITIES

Artists Collaborate:  In this activity, I copied an MC Escher print I had and cut the print into 2″x 2″ squares.  I handed the students a square and a 3″x 3″ post-it.  The students had to transfer their piece to the post-it and then go in the hall and assemble the puzzle.  In hindsight, I chose a very hard image to work from.  I know better for next year. 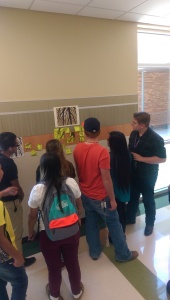 Artists Solve Problems:  I had lots of ideas for this activity.  In the end I decided to show the Ted Talk “Embrace the Shake” about artist Phil Hansen.

Artists Take Risks:  I had stumbled upon this video we ended up calling the “Baby George Video”.  It was short, but I think the message was super clear.

Artists Communicate.  In this activity, students found a partner.  One partner was given an image and had to describe the image, and without showing the partner or pointing to the partner’s page, get them to draw the image. 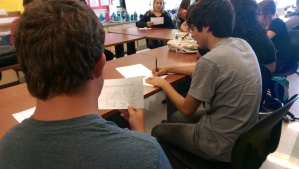 Artists Observe: I had taken this quiz on facebook that I thought would make a great observe activity.  The students were shown four squares and had to choose the one that was a different shade.  Every time they got it right, a new grid (with more squares) would appear.  It got harder and harder as the difference was slighter and slighter.  On top of that, it was timed.

Artists Create Original Art:  What better way to kill 2 birds with one stone, but to do a short Slides presentation about Copyright, Fair Use, Appropriation, and Parody.  In the presentation, I briefly went over a concept, then the students were shown a case and they had to decide what the outcome was.  The presentation ended with a mock violation between DisneyLand and Street Artist Banksy’s Dismaland.

Artists Develop Art Making Skills: Each student was equipped with a marker on the end of a 3′ dowel.  We went out into the hall where I rolled out a long paper and had the students look out the window and draw what they saw. 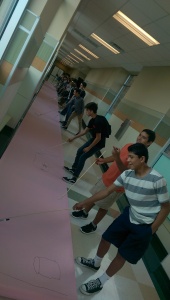 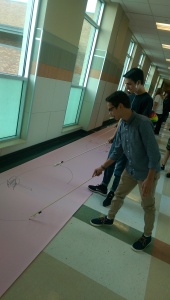 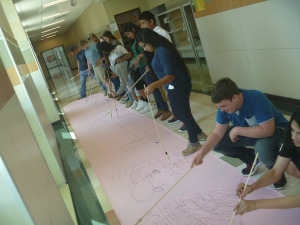 Artists Have a Global Awareness of Art Making:  The third video I had them watch was the trailer for Season 7 of the PBS series Art 21.

Artists Reflect:  For our final activity, I handed back all of the 8 previous reflection sheets and gave them a new reflection sheet.  I asked the students to review what they had chosen and written for each activity over the past week and a half. They then had to choose one behavior for each activity.  (On the previous reflection sheets, many students circled several behaviors for each activity and had repeated behaviors from activity to activity.  I will come back to this shortly.)  After making connections, they were left with one behavior,  They were asked what filling out all the sheets had to do with that behavior, and they had to connect that behavior with being an artist.

I returned all the reflection sheets the next day and we had our Boot Camp Wrap Up.  I created one more slide show and engaged the students in a discussion to decompress all we had just done.  We went through each activity and I asked them what behavior they thought it was.  I asked why.  Sometimes they all agreed and sometimes they didn’t.  And, they were able to say why for all opinions.  I would reveal what behavior I had intended to connect with the activity.  Then with my enormous passion and animation, I talked about what that behavior meant in terms of art and being an artist.  As I walked around the room and looked at the students, I could see they were taking it in.  I see the sparks.  When I got to taking risks and how my classroom was a place to be comfortable, a place to explore and fail, I could see the looks on their faces change–a change I thought was positive.

The slide show ended with a review of how they would be assessed in my art class.  I asked them what an 87 on an artwork meant.  I could see them reaching for something, but floundering.  I assured them that their lack of finding a answer was okay. The number grade in art seems arbitrary.  It doesn’t help you know where you are or where you need to go.  They agreed.  They now knew why we spent time looking at these behaviors and how we would use them in the coming year.

I learned as much from this boot camp as my students did.  As the first reflections sheets started to come in and I began reading, I was surprised.  Surely the students would have the same thought process I did.  ::face plant::  I became so interested in the different behaviors they chose for each activity and the various reasons why.  I decided to make a chart to record all the different choices.  Artists collaborate and artists communicate were two that were often connected to each other.  The same was true with artists solve problems and artists take risks.  The students made connections between the behaviors without even knowing it–connections that are just inherent in the behaviors.  Of course there were those students that went through the motions without much thought, but there were many that I saw really thinking about what they had just done and making connections.  And, students were honest by saying they didn’t understand what a behavior meant (like global awareness), so they weren’t really sure if they were making the right connections.

The Artistic Behaviors Boot Camp achieved what I hoped it would.  It introduced the students to the artistic behaviors. It enabled the kids to begin to think and to make connections between what they are doing and what artists do.  And, I got to learn a little about my students and how they think.  Were there rough patches?  Yes.  I wanted to throw in the towel after the first day. But, I am so glad I didn’t.   I am sure I will make tweaks to it in the few weeks before school next August, but for now, I am calling this boot camp a success..